Six years ago, Jen made her way into the insurance industry and started an agency. She grabs every opportunity to promote her business.

She knows that social media is important to get prospects, but it’s not easy to keep up — she spends most of her time doing paperwork and addressing customer needs. Therefore, social media becomes lower in her to-do list.

She is able to post more often after joining Hearsay Social, where she can select and publish compliant posts created by her corporate marketing team. She subscribes to her corporate social media campaigns every month.

Jen wonders what can be done to make her life easier.

At Hearsay, we asked ourselves:

How might we help Jen, as well as thousands of insurance agents and financial advisors, stay active on social media, while spending most time connecting with their clients personally?

As the design lead for this project, I worked closely with my product manager and engineers from the very beginning. Together, we’ve revamped our mediocre campaign to be a dynamic, scalable social media automation powerhouse. It has become one of the fastest adopted features and helped the company hit the Shared Strategic Goal within nine months.

After diving in what’s already in Hearsay, my product manager suggested looking at the existing social campaign feature. It was built with the intention of automating social media publishing, however, customer adoption was very low.

My corporate releases a new campaign every month, I have to enroll every time. Why do I need to enroll that often in order to use it?

It’s hard to get agents to subscribe to every campaign, so we plan 6-month mega campaigns as a work around. This takes a lot of planning.

Indeed, every released Social campaign was like a launched rocket, no further modification was allowed. The existing campaign worked just like how other digital marketing campaigns work, but that’s obviously not working for our target users.

The hypothesis: what if we make every campaign a never-ending content publishing stream?

We were onto something, but was it the right path?

If the hypothesis was correct, we would see needles moved in:

By continually adding content to a campaign, agents/advisors can stay active on social media. Customers love this.

Subscribed agents/advisors will have content automatically published to their social media at certain cadence.

This potentially attracts more agents and advisors to activate their Social accounts.

Both the engineers and I were very new to the Social product. In addition, none of us knew how campaigns were used. To better understand the problem, I invited 10 campaign creators to talk with the team on:

Our customers wanted it badly — what did it take to make it real?

In parallel to the customer conversations, the engineers and I evaluated efforts to turn our hypothesis into reality.

The architecture was not designed to support the desired campaign subscription model; the frontend was hard to build upon.

The existing campaign UI was not well thought out:

The conclusion: it had to be a complete overhaul.

Entering the design phase, I set up a weekly routine to check with my team. We use the time to review design and implementation as a group. The engineers started working on the backend, and I wanted to make sure their changes can accommodate future design directions, and make sure designs were ready for them when they needed them. Throughout the entire project, we stayed on the same page.

The major revamp area. Everything had to be built from scratch, including backend, frontend, and UI.

With existing UI and architecture, things can work. We should improve this if there’s capacity within the project.

I used an iterative design approach to ensure:

Learn all about the existing campaigns

Homepage – where the value shows

The campaign creators needed reasons to come back to the Campaign feature over and over again. After researching a number of popular campaign apps, I learned that displaying campaign metrics helped to inform users of its value.

To do this, the existing homepage desperately needed a facelift. I explored layout options and quickly ruled out ones that didn’t work. 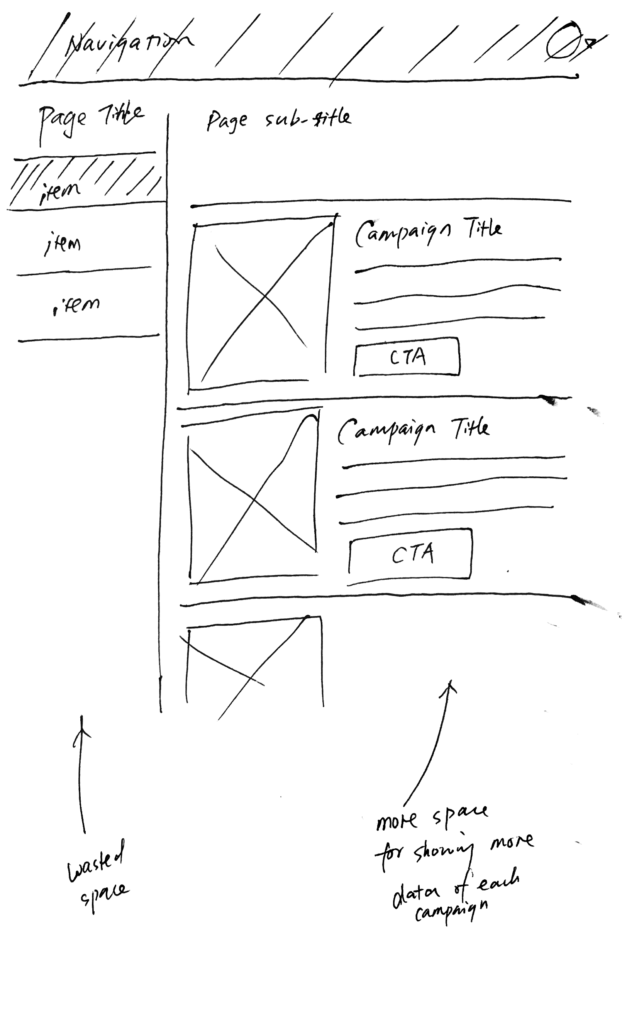 I straightened out the campaign creation flow, so that it: 1. reduces redundant steps; 2. gives users more confident when releasing a campaign; 3. can be extended to the “update a campaign” scenario.

I experimented with different layouts as well as interactions, and temporarily landed on a design direction, so that I can conduct user testing with them.

I made my designs into a clickable prototype and let 7 campaign creators play with it. I scheduled the sessions across a period of two weeks so that I can iterate in between them. I asked my PM and engineers to attend the sessions and get first-hand feedback.

I tried a variety of ways to make the existing campaign list and details nicer, but none of them was satisfactory — users still needed to go through different pages to subscribe.

I changed my focused to simplify the flow. After all, what the subscribers wanted to do was “subscribe” — whatever can make it fast to come in and out quickly.

After testing with 5 users and a few iterations, I landed on the final design. This solution allowed users to conveniently subscribe to campaign on the Campaign List page. They can subscribe to as many campaigns as they want, all within a few page scrolls and clicks.

We launched the campaign!

Jen subscribed to a few campaigns. She can focus on her core business needs and at the same time stay active on her social media forever.