In my project management course today, the professor told us a very interesting test in psychology: There is a room divided by a fence (not completely) into two parts, say A and B. We let the chimp and banana close to each other, however not in a reachable distance. Guess what would happen? 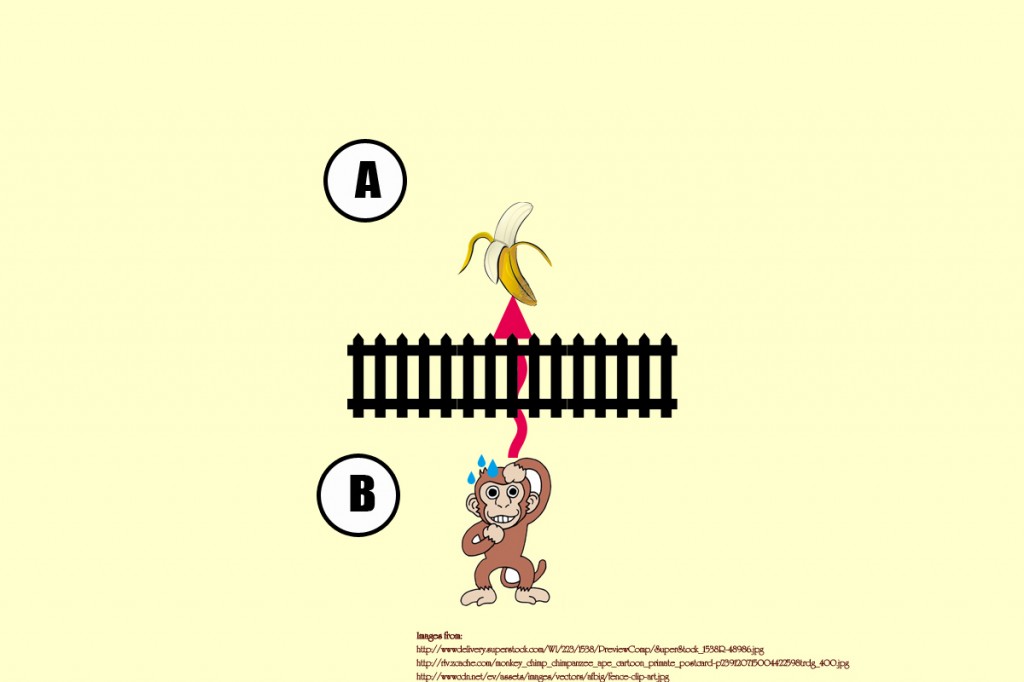 Pic #1: When the chimp is kind of close to the banana, he spends all his strength to reach the banana by hand through the fence.

The chimp sees the banana through the fence, and he would try to get it. Interestingly, he would just stuck there and try his best to reach it (even may hurt himself), for a long time. Let’s change the experiment a bit, by moving the banana a little farther, in an unreachable distance. Then would the situation change?

Pic #2: When the chimp is far from banana, he thinks of going around the fence and get it.

Yes he will make it by going around the fence! How come he just forgot this trick in the 1st round of the experiment, spending so much effort in vain? You may say if I were him, I will go get the banana directly around the fence, even without thinking of it. Well well, yes I admit, this is one of the aspects that human beings are much smarter than chimps. But that’s not the point of my post here.

Calm down and think for a while. Have you ever met situations like this before? Sadly, I was the chimp just sometime ago. I remember clearly that it was one of my web connection assignment a year ago. I got stuck at some point of the connection and could not make it right. It was not a super urgent assignment at that time but my mind was totally blank except it, thus I decided to work on it till it was resolved. After about six hours (and it was 6 o’clock in the morning), I still had no idea and what’s worse, I was so frustrated and started to doubt my IQ. Then I decided to have a break. Just after having a cup of water, I suddenly thought of one of my class materials that might have a solution to this problem. I ran to my seat immediately and started working on the problem again. Oops I solved the problem in 10 minutes!

Well, it was not a very pleasant experience. I really learned a lesson from it: never spend too long on a single problem if you have no idea about the solution. Stop. Relax. Talk to people. Discuss. You will find the solution. Sometimes others could help, but most of time the solution itself will show up automatically. If you are a team leader, this is more important. Don’t get the team frustrated. Maybe it is a good idea to let the team relax for a while, solutions may come out from another angle.

It is good to be a smart chimp that knows going around fences at the beginning, however, what I appreciate more is an even smarter chimp knows when to stop trying through fence and think why, and then go directly to the banana. Be flexible & succeed!!