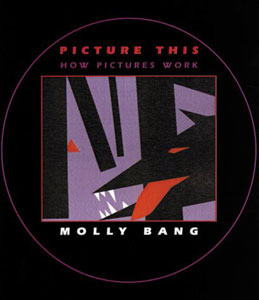 Have you ever struggled to tell a story effectively using pictures?

Think about the picture books we read when we were kids: how those vivid pictures got us involved, making us laugh or cry together with the characters. How do they make the stories so powerful?

Picture This: How Pictures Work by Molly Bang is a brilliant book to help anyone who wants to excel in picture storytelling. It tells us step by step on how to build a picture with powerful emotional message, and 10 principles that makes the storytelling better.

Following the book, here’s an exercise I’ve done to explain how it works.

The Exercise: a bird or birds attacking a victim

Molly says, before I began, I needed to think about two questions:

I thought about answers to these questions, and got ready to work.  By the way, I used construction paper and scissors.

I wondered what colors were good for this scary moment. I hoped I understood the instructions correctly, and I chose four colors in total: black, brown, red and white. Then I started brainstorming:

“What about walking in dark? That’s pretty scary. ” I made black paper as the background.

“Walking… alone… in the wild.” I cut wavy roads on a hill from brown paper.

“A… lonely… man.” I cut a man from white, thinking this man is getting attacked because he looks too bright.

“And a group of scary birds… attacking him.” After random cutting, I got a group of birds, flying towards this poor guy.

It looks a little bit scary, ok. But Molly says, “ok” is not enough, think about how to make it better. Of course, it’s hard to put everything in place effectively in my very first try; and the process of improving is the fun part.

I took some time to rethink how to make it scary. What elements should I include in the picture?

Next I went back to Molly’s 10 principles, hoping to find some advice. Here’s what I’ve got:
I want the victim to look weaker in my second version. So I made a creature that was bending over, just like he was trying to hide from the birds. I added sharp logs and made the slope steeper. Is it scarier now?

My second version was closer to “a scary image”, but the birds were kind of messy — they were not all attacking my victim. Other than that, how to make the victim even weaker?

I put more logs on the slope, made the victim smaller and triangle birds point to him. I also played with colors to get a different look and feel. How about now?

I don’t think it’s as scary as the second version. So there’s more to play with…

I hope you’re getting the idea — If you want to build a powerful picture, do the following:

Go play with pictures! Off to continue tweaking mine now :)