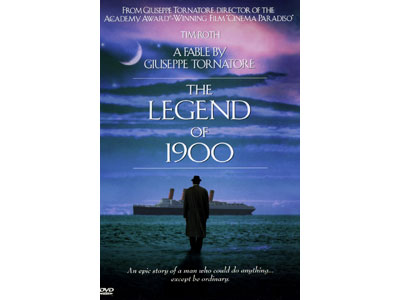 Today, I revisited The Legend of 1900, my favorite movie.

1900 was the name for a infant boy abandoned by his parents on a cruise. He was raised by the crew, got discovered on his piano talent and played music for the cruise passengers ever since. He never set a foot on the land, and in the end, he sank together with the retired cruise in the ocean.

In his world, he only had the piano, the cruise and the ocean. With 88 keys on the piano, he can play infinite music; but he’s too afraid of the unknown land world, a world of too many people, too many streets, too many buildings, like a piano too big with endless keys, he thought he would never be able to get a hold of it or play his own music of life with it.

I watched this movie for at least five times.

Every time I watched it, I can’t help thinking “what if”s — what if 1900 can make up his decision and simply make a step on the land, what if he met the girl he fell in love with, what if he found out he can fit in the land life, what if… but ultimately, it’s 1900’s life, nobody can make a plan for him. He made a best choice for himself.

This is also true in my life, your life and other people’s lives. We are the ultimate decision makers for our own paths.