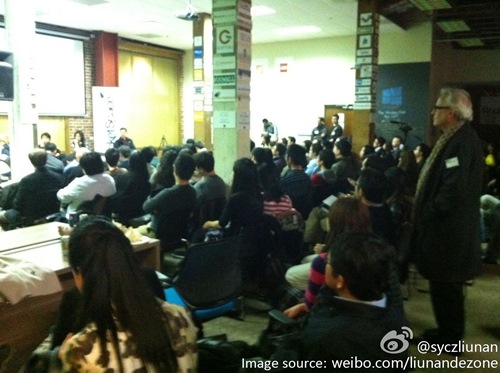 I had a great Friday night with a group of Chinese entrepreneurs and over 200 people who are passionate about innovation, the Internet and Chinese start-ups. I was very impressed by the enthusiastic young founders and their demos, and got to talk with some of them about interesting product ideas, such as Jianke (Internet bookmark) and mPress.me (dedicated mobile portfolio). I was also fascinated by the panel discussion about innovation and start-ups in China vs. US.

Some US entrepreneurs say that China does not have innovation – China is often blamed for copying product ideas or design concepts from leading companies, for example, Renren, the “Chinese Facebook”, looked almost the same as Facebook when it was built years ago (now they are very different).

It’s true that lots of Chinese companies start with copying ideas from great oversea products, but as time goes, only those with successful localization, adaptability to Chinese market/policies and consistent product improvements can thrive. Sina Weibo, originally translated as “Sina Micro Blog”, was very much like Twitter since it went public in 2009. Now it has become somewhere in the middle of Twitter and Facebook, that is, a place that not only lets you tweet weibos, but also play games, try interesting apps and get engaged in weibo event live streaming.  I personally find Weibo has much more fun than both Twitter and Facebook.

Innovation and development in China is different from the US to some extent, as Hany Nada, one of the panelists, pointed out. In the US, it’s ok that a start-up does not make money in the first few years – the investors would like to wait as long as the ideas/technologies are interesting; but in China, lots of start-ups are very commercial – they want to make money as soon as possible – and not many investors are that patient. Another interesting difference is somehow related to company sizes: in US, bigger companies are slower and less innovative than start-ups; while in China, if a big company (e.g. Tencent) gets to know an interesting app built by a start-up, “the big guy may call 10,000 people to work on cloning this app immediately, push it to market in one month and improve from there. Once their app is public, the start-up may be killed then.” Hany said, “very, very different from US companies”.

Moreover, it was great to learn how big the Chinese Internet and mobile market is – by the end of 2012, there were around 600 million Internet users and 400 million smart device users (this number is likely to reach 560 million by the end of 2013). In fact, although the Chinese market is huge, many Chinese entrepreneurs decide to go global (some of them in this event are based in Silicon Valley). Compared to China, the world is obviously a much bigger cake and has many more challenges and opportunities. I wish them best of luck and will continue get involved in great events like this, because I may become one of them in the future.

Check out the Association of Chinese Entrepreneurs’ website to stay updated with upcoming events.